The first year of Sharing from the Start has provided significant evidence of the positive impact of the project on children and their parents and carers and preschool educational practitioners.  A survey of all the settings involved in year 1 (2017 – 2018) reported ‘Very Positive / Positive’ impact on children’s educational outcomes (100%). A summary of the survey results is depicted in Chart 1 shown here.   Many examples were given of the impact on the children’s Personal, Social and Emotional development in Northern Ireland (NI) and Well Being and Identity and Belonging in the Southern Border Counties (SBCs).  It is not surprising that as many of the shared curricular sessions took place outside, there is evidence of the impact on the Physical Development of the children; their Exploring & Thinking skills and their knowledge of the World Around Us.

It was also reported by over 70% of education practitioners that Sharing from the Start project has had a positive impact on bringing about greater cross-community interactions between parents; and improved community involvement with the early years setting (84%).  The settings have also reported improved quality of provision (98%) and enhanced leadership & management (91%) in the preschool.

Indeed professional development of the preschool practitioners and their increased knowledge, skills, confidence and attitudes has been a major factor in the success of Sharing from the Start in Year 1.  Sharing from the Start provided three days off-the-job training, along with on-going mentoring, facilitation and support by Senior Early Years Specialists throughout the year.  The adjoining chart shows the increase in the practitioner’s ratings from when the project commenced to a review at the end of year one.   The aim is to build on the successes of year one, during the second year of the project. 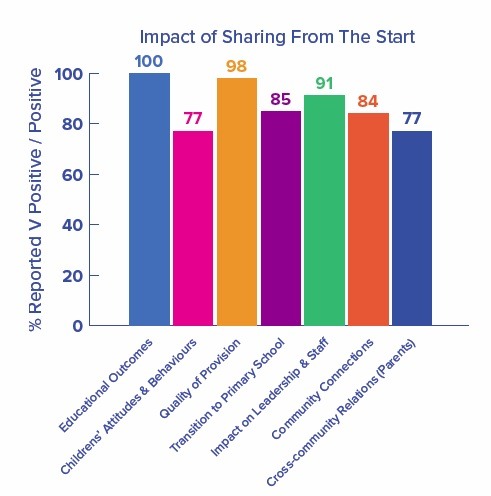 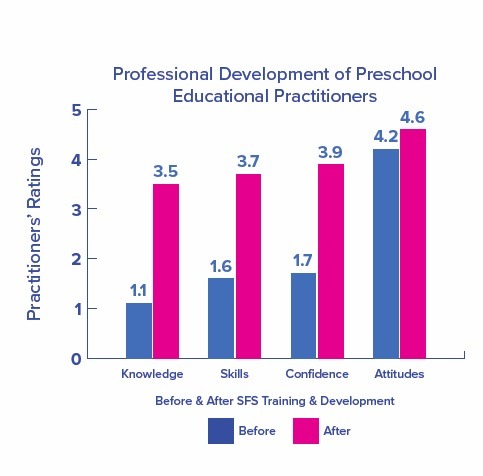